Winter, Look Out: These Bulgarians Are Coming For You

For Centuries, “Kukeri” Have Helped Locals Frighten Off Winter’s Worst

“This is why festive folk laughter presents an element of victory not only over supernatural awe, over the sacred, over death; it also means the defeat of power, of earthly kings, of the earthly upper classes, of all that oppresses and restricts.”        -Mikhail Bakhtin

February in Pernik, Bulgaria: a landscape of drab high-rises, rusty kiosques and knee-deep gray snow. In these seemingly grim surroundings, excitement is brewing. It is the eve of the largest “Kukeri” festival in Bulgaria, and a few thousand people will brave below-freezing temperatures to watch the masquerade in the town’s main square.

The “Surva” festival may be the most colorful thing that happens all year here. Among educated Bulgarians, Pernik (population: 80,000) is often the subject of ridicule. Compared to nearby Sofia, the capital, this rough mining town is a wasteland, a place that hums more to rowdy bar chat than to good music or elevated conversation.

Yet it has been an industrial hub for barely a century. Before that, Pernik was a medieval fortress; in that spirit, perhaps, it is now a primary defender of the Kukeri tradition, a pagan carnival that has survived both Christianity and Soviet atheism, not to mention the five centuries of (Islamic) Ottoman rule that ended only shortly before the late-19th-century mining boom began. The hairy beasts have survived all these regimes. With any luck, they will survive many more.

The original Kukeri are thought to have emerged thousands of years ago, in opposition to something just as imposing as this history: the Eastern European winter. Bronze Age men would look and act in ways designed to scare off winter spirits. They made noise and danced wildly, in a bid to make the grains grow and their own people prosper. In more recent times, at least, a primary piece of the ritual has always been the mask itself. It is made of wood, fur, horns, and (in some regions) glittery elements, and can have an angry or haunted look. Lower down, at the waist, heavy belts are strung with bells that weigh dozens of pounds apiece.

The masked men come out to haunt Bulgarian villages seven weeks before Easter. It is in the small towns that the Kukeri thrive, mainly in poor regions. Ljudmil, a third-generation artisan, claims that the cold months are his favorites. He spends his winter holiday with his father and grandfather, contributing to the family woodworking business under the snowy slopes of Cherna Gora. His family’s village, Selishten Dol, has fewer than 100 people in it.

The workshop at the back of his family’s house is small and cozy and strewn with wood shavings. A simple bed and an old stove are among the scarce furnishings. Ljudmil may take a few weeks to finish a single mask, which he will sell for around €200. At that rate, it is not a craft that Ljudmil (who spends most of the year in the United States, working in the service industry) or any other Kuker does purely for money. “I can’t imagine the start of the new year without the sound of the bells,” he says. Their tinkling, he maintains, is enough to lift anyone out of winter doldrums.

Meanwhile, in Priboi, another locality close to Pernik, two burly men have stuffed their costumes into the trunk of an old Lada. The masks are heirlooms and the sheepskin garments are scarred with rough stitching where rips and tears have been mended over the years. These garments—sometimes also made of longhaired goatskin—tell a vivid story of spirited use and reuse. Given how much time and handiwork goes into each one, it makes sense that they are not disposed of lightly. A chain of antique bronze bells might be valued at several hundred euros, more than a typical month’s wages.

Costumes are stored in the village hall until seven weeks before Easter, when they are put to use in celebration and remembrance. In this way they feel like public property; the fact that no Kuker ever appears alone is another indicator of the tradition’s communal spirit. (The leader of a group of Kukeri carries a hooked shepherd’s staff, or gega.) The locals are justifiably protective of it. To document the festival in Pernik is one thing; to arrange for individual portraits of Kukeri in their own villages is another, one that requires in-depth negotiating.

The Kukeri used to make the rounds themselves, knocking on the doors of neighbors. Nowadays—especially in Pernik—their activities feel more like public spectacle. But they are still a bridge between past and present, the momentary and the eternal, and a means of laughing at the oppressions of winter and of one’s fellow man. While the masks are out and the bells clanging it is the small-town Kukeri, not the sophisticates of Sofia, who are doing the mocking. 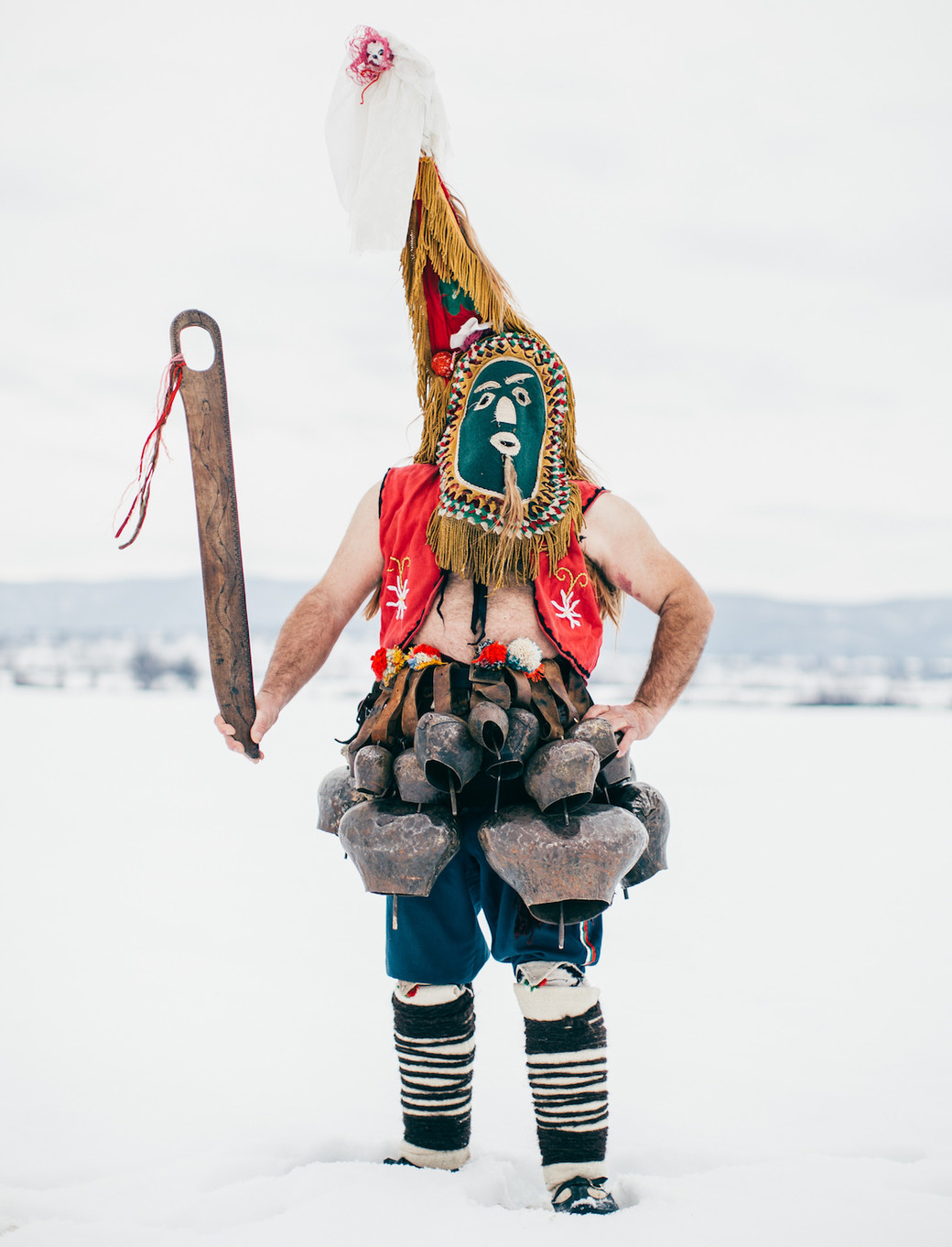 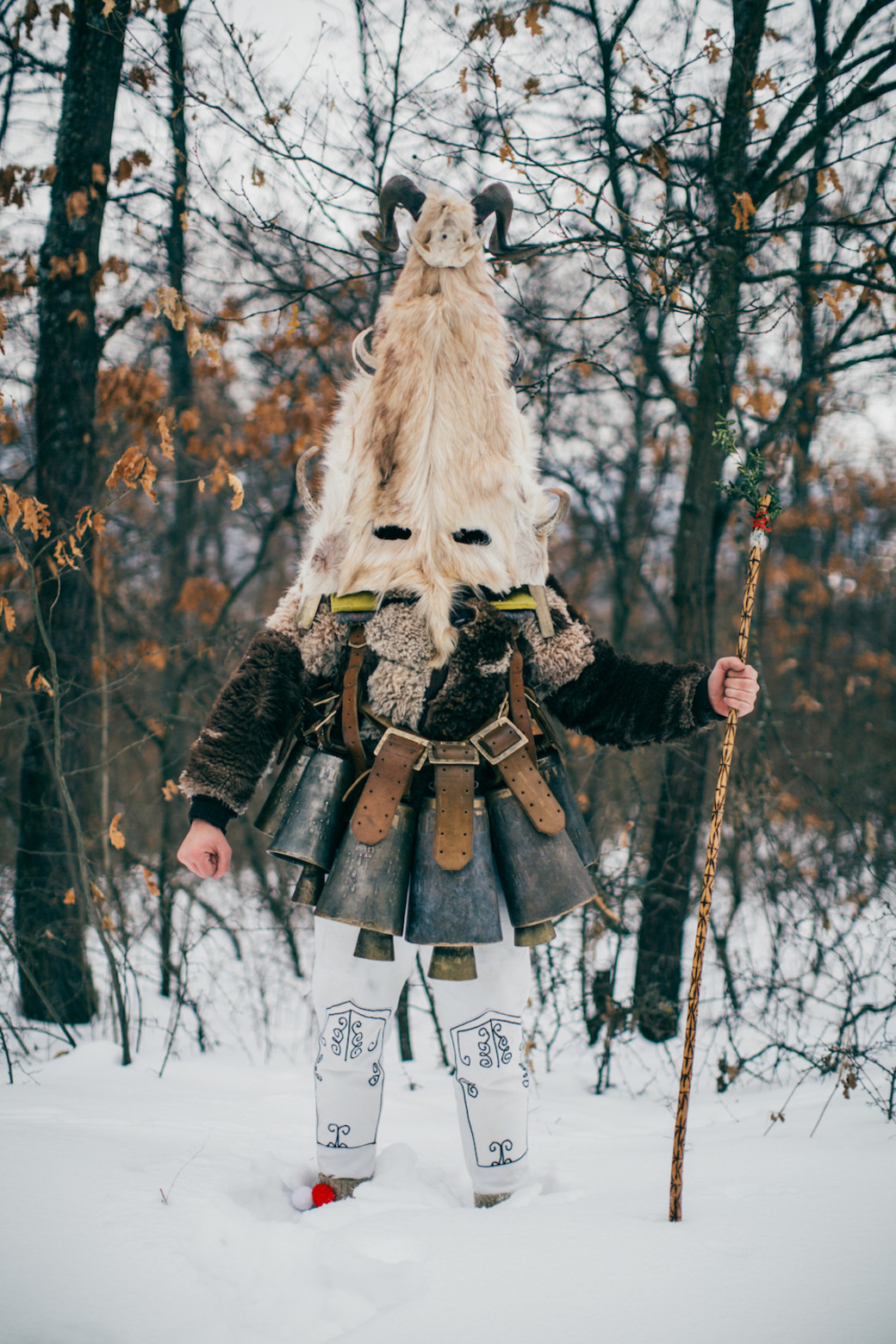 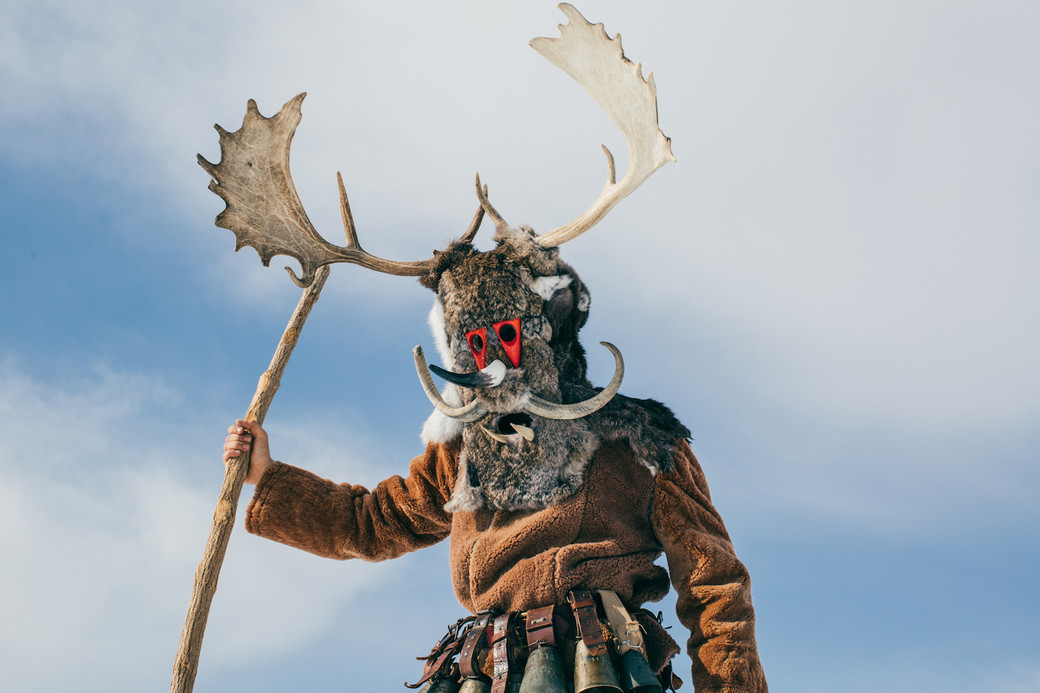