For residents of Tonle Sap, it’s life on the water year-round

Just south of the spectacular medieval temple compound of Angkor Wat, a world built on a very different set of foundations exists. On no foundations, really. Cambodia’s Tonle Sap lake-and-river system is a nursery of aquatic biodiversity, an ancient center for fishing and agriculture—and a place where much of the human population has adapted to the skimming, bobbing realities of fulltime life on the water.

There are floating houses, schools, basketball courts, gardens, and gas stations. Picturesque temples and dwellings are erected on stilts. During the dry season—the temperate world’s winter and early spring—these bamboo supports poke out from under buildings like the skinny legs of the area’s many wading birds. During the monsoon season that hits peak wetness in October, they are, like so much else here, underwater.

As it has it for centuries, the Mekong basin’s annual flooding sets the broader rhythm for local life. It is a mighty river, the largest in Southeast Asia. Its flow begins thousands of miles north, in Tibet, and empties, via Vietnam, into the South China Sea. The monsoon storms through with such force that the silty channel running between Phnom Penh and Tonle Sap temporarily changes direction, infusing the lake’s environs with nutrient-rich sediment and shoals of migrating fish.

Those fish have been indispensable to Cambodians for ages. As long ago as the 9th century, Tonle Sap’s fishermen were feeding the megacity of Angor Wat. Today, they harvest 350,000 tons a year—60 percent of Cambodia’s freshwater haul—for a country that gets the majority of its protein from fish. Some of this is tonnage is “money fish,” the minnows that typically end up as prahok, the fermented fish paste that is a staple of Cambodian cooking. At the other end of the spectrum are behemoths like the Mekong catfish and the quarter-ton Siamese carp.

Those fish at the top of the food chain are in shorter supply than ever these days, a telltale sign of overfishing. Measures are now in place to protect them, as well as other large aquatic species, like Tonle Sap’s freshwater dolphins and giant stingrays. But such laws are only as effective as their enforcement, which to date has been less than robust.

Many of the threats now facing this ancient water-world stem from its booming population: some 1.5 million people live in its floating villages, many more than in the late seventies, when a flood of new arrivals poured in from war-torn Vietnam. The uptick in farming in particular has created a strain on resources.

Tonle Sap’s accessibility makes it an appealing place to visit: it’s just 22 miles, or 35 km, from the tourist hub of Siem Reap. Rushed travelers often only see the tourist trap of Chong Kneas. Deeper in lies the lake’s largest town, Kampong Khleang, with its “wooden skyscrapers,” and calmer scenes of women gathering bundles of water hyacinth and fishermen in their motorized sampans casting nets.

This is what the casual visitor sees, along with scattered evidence of increased fishing and farming. But the biggest threats to Tonle Sap are invisible at a glance: climate change has intensified the extremes of the monsoon cycle, and more than 100 hydropower projects are currently being built or planned upstream.

The effects of all that damming remain to be seen. Part of the problem is that the planners, bent on narrow-minded ideas of growth, don’t seem to be looking beyond the present. As the demands being placed on this remarkable hydrological system mount, Tonle Sap and its residents are more and more at risk of being hung out to dry. 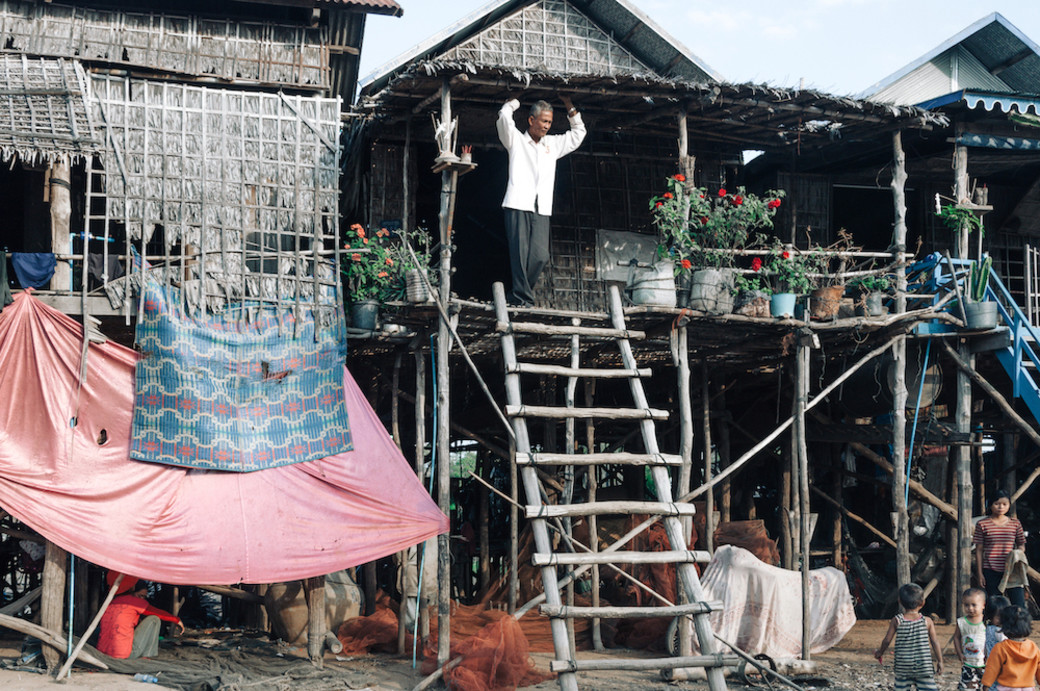 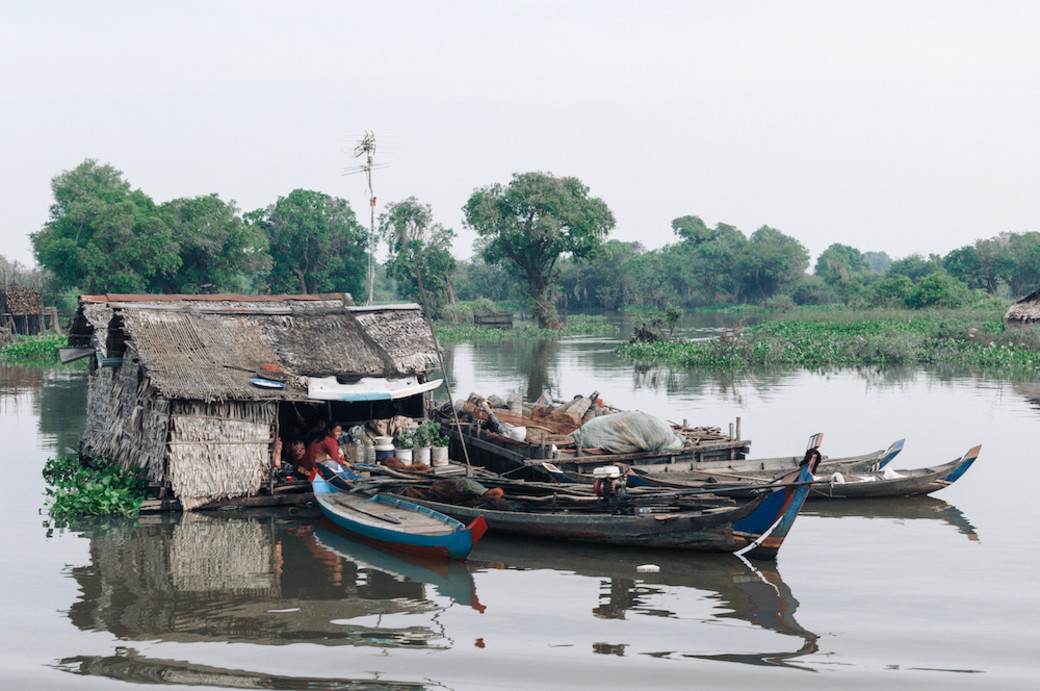 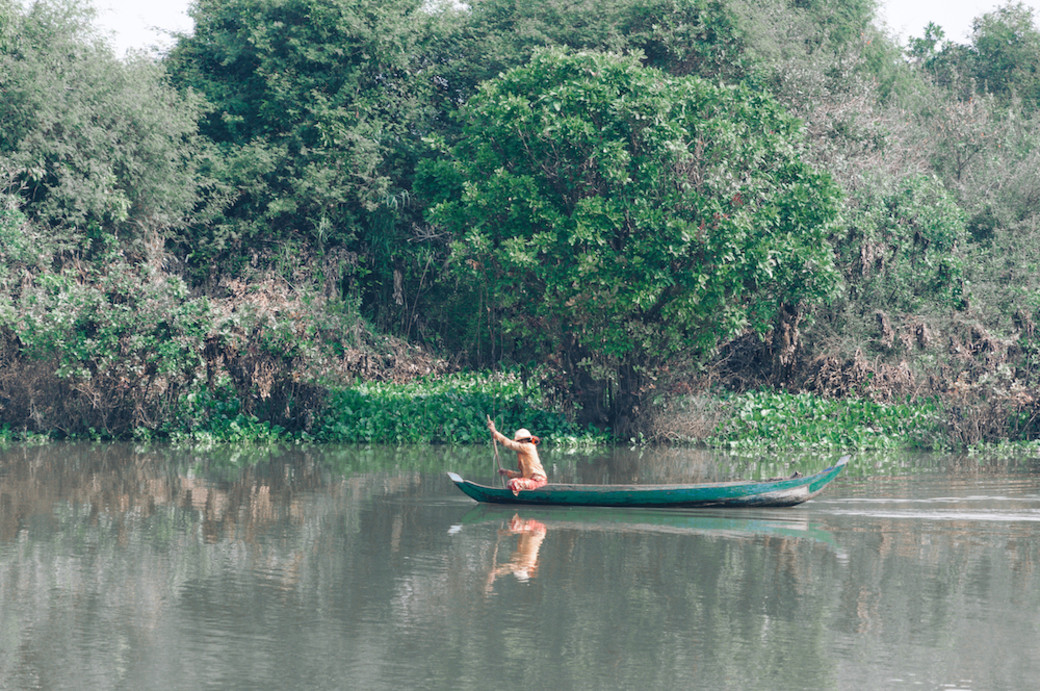