The Trial That Makes a Hamar Boy a Man

In parts of rural America, pranksters take part in a casual pastime known as ‘cow-tipping.’ It involves going out under cover of darkness, sometimes intoxicated, and knocking over sleeping cattle.

The young Hamar men of Ethopia’s Omo Valley, near the Kenya border, have a means of proving themselves that might seem to be related. Every one of them must eventually succeed at ‘cattle-jumping,’ a challenge that requires them to walk across the backs of livestock.

Unlike its Western counterpart, this Omotic practice has no air of after-hours delinquency about it. Quite the contrary: cattle-jumping is a fully sanctioned activity among the Hamar, a ritual organized in broad daylight and carrying important consequences. It is the way an adolescent male proves himself ready to marry and to own livestock—to become a maz, his community’s definition of a grownup.

This brief test of nerve and physical prowess is a highlight of multi-day Hamar gatherings that take place between rainy seasons. Visitors arrive from nearby villages, which typically consist of ten to thirty households. (The agro-pastoralist Hamar are thought to number about 45,000 in total.) They lounge in this post-harvest atmosphere, and talk and drink sorghum beer. Women dance in groups, their decorative bells tinkling in synch. And some of them prepare for a ritualized ordeal of their own.

In a complement of sorts to the cattle-leaping that will follow, women line up and receive multiple lashings at the hands of a male figure. The violence of his micere, or whipping-stick, is meant to test their loyalty to the young man about to take center stage. Some of them are related to him, others not. (Either way, he will be expected to reciprocate if called upon by one of the women who submitted to ritual punishment on his account.) And the women rise to the challenge with arguably more swagger than he does. They grin and taunt the whip-holder to strike them harder as they receive his blows. Like the resulting scars, unflappability in the face of pain is a point of pride.

New roads have opened the Omo Valley to more Western visitors in recent years. Tourist exposure to these ceremonies has increased in turn, as have professions of shock at their apparent cruelty. The value of kneejerk disapproval is uncertain, to say the least. Worth considering: the average Omo Valley woman endures the pain of childbirth (unmitigated by modern painkillers) a half-dozen or a dozen times. Among her own people, her scars arouse the opposite of disgust or condescension. As in other parts of the Omo Valley, they are, if treated correctly, considered beautiful. (For more on the “open convention” of wife-beating in Hamar society and “the use of the whip in social control,” see this 1994 study by ethnographer Jean Lydall.)

The female spectators look on, their wounds doused with healing ash at this point, their skin and taut braids glistening from the application of an earth-toned paste of ochre and butter. Older men herd cattle together for the jumping ceremony. Ten of the animals—docile, castrated males—are assembled in a row, forming a wobbly and multi-legged balance beam. To add to the difficulty, the organizers smear the backs of the animals in slippery cow dung.

The head of the young man in question is shaved to the mid-crown. (If he succeeds, he will be shorn of hair entirely.) He will cross this bridge unclothed, as if to accentuate his remove from the group during the crucial moment. The challenge: to leap onto the back of the first bull and run back and forth four times. He is allowed to fall off only once; a second tumble and he has failed. He must wait another year before trying again, suffering a considerable loss of prestige in the process. Triumph, on the other hand, brings the wrap-up ceremony that will make him a maz.

The young man may then marry, although in all likelihood he will not do so right away. Taking a wife requires a steep outlay of livestock and guns, one that most Hamar men cannot afford until they are in their thirties—and memories of walking on the backs of cattle seem far, far away. 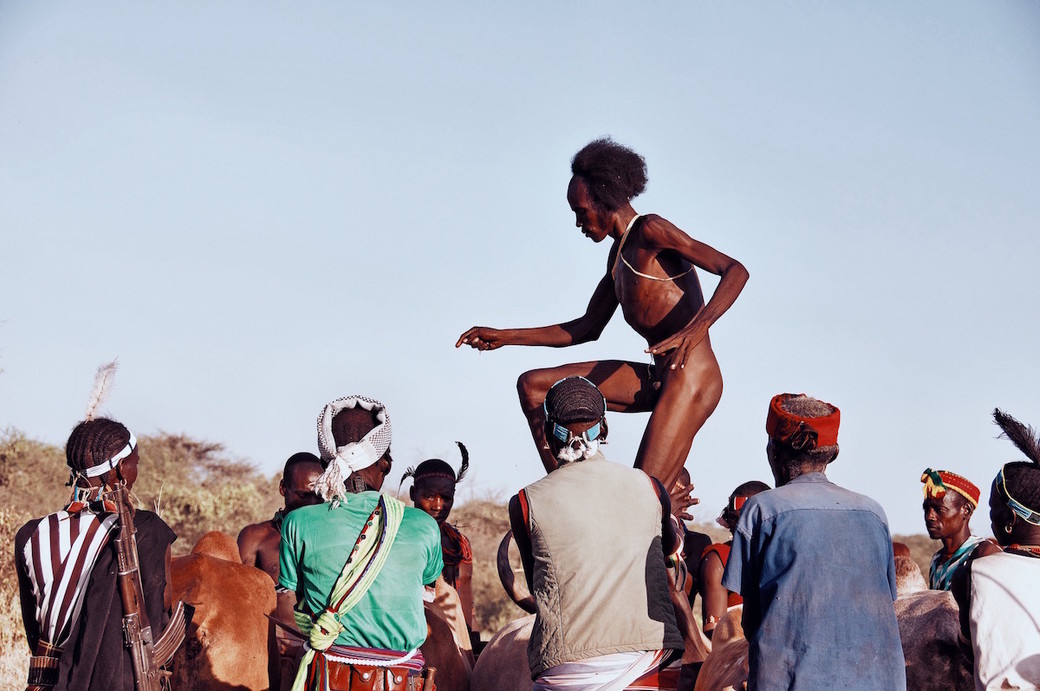 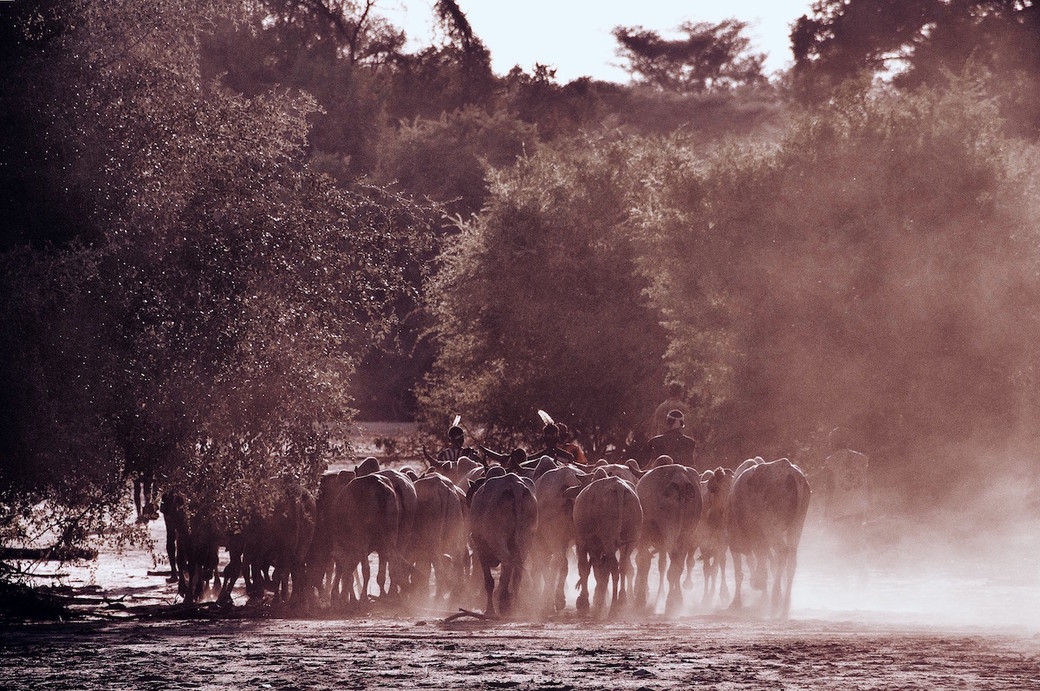 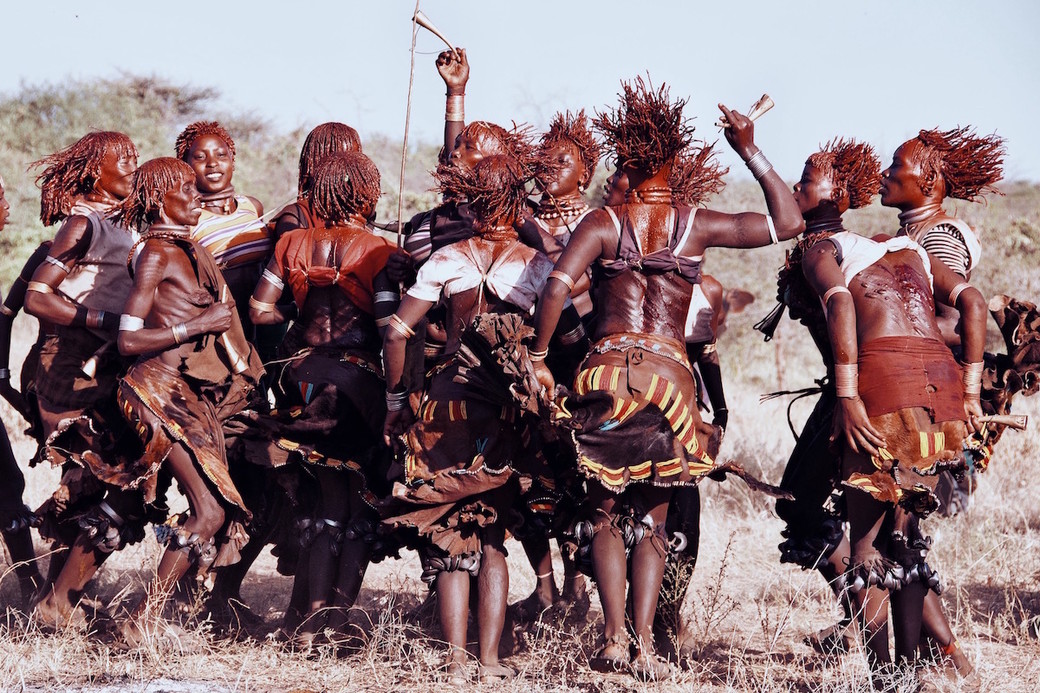